Here is in a sumarized way (and revised as of April-25th, 2019), what our version of POH will have changed from original version.

My full respect for the work from this awesome team, and its missing leader, Joe (hope everything running well for him and see him back on duty here shortly

"As you will notice, if read the whole texting

, all changing proposals will only benefit POH official version, so I still keep this dream of seeing them reflected in one future version of POH.

. Whole theater is about to be revised and re-adapted to the new BMS version, so why not take this chance to throw the cards to the table again and check my future".

All listed items were already done for our beta-test version, but ofcourse still only compatible with BMS4.33...

So, this was the stage we were at this moment. Beta-testing for minor bugs and flaws in POH_201VFS.

But, BMS 4.34 came to light and all tests will stop until getting all converted, and keep testing after conversion phase.

...- This way, the  most airfields will match realistic Latitudes.

1.3) Review all airfields positioning to get precision match to the above coordinates (by the RWY centers).

...- Many cases here, will require also re-tilling areas nearby (taking the opportunity to make better shape of many areas/ cities regarding the tiles, mainly in Portugal)

1.4) Anyway, some airfields will show very close to theater limits, according to this coordinates re-positioning ideas. Specially talking about a few French airfields, one Algerian and one Spanish airfields;

1.4.1) These should be removed out of POH. They are too much close to theater border, and I mean distances like 5NM to POH border.

1.4.2) We can consider do like did about Azores and shift them to an unrealistic postition further away from POH border, thou.

...- So this way it will turn to an easy task the workload of locating all airbases again

2.1) All grup moved somewhat to north/east

...- This way they will match realistic Latitude and Logitude (according to above math formula)

3.1) Some airfileds need some review about their objects (only talking about ILS antennas, TCN antennas, MALSR, Landing Lights and Taxy Signs)

...- Found many objects out of their IRL place, specially MALSR over RWY threshoulds...

... - Correction to the TCN antennas, many of fotorealistic airbases didn't have their own antennas

4.1) Just like nr. 3 above, some airfields need some elevation correction, but this work was extend this work on all theater

...- This way the airfields will match realistic elevations, Many features around them need to be corrected so IAP charts will also match the surroundings elevations features.

...- Under testing is the possibility to implement RWYs curvature.

...- Yes, I know... Nikos request, but this subject should be US to determin how they should stay

...- This is a simulator, not reallity, so theres already many unrealistic detais. As BMS dev team used to say, compromises should be taken and the fotorealistic textures should be a must in POH!

...- Anyway, this required to revert TWR voices to match the RWY markings (whenever possible)

5.2) A few airbase RWY headings and even kind of airbase were incorrect.

...- Changed all AFB airfields to airbase kind (not airstripe kind)

...- Some airbase, could and should be implemented using different falcon stock headings options, much closer to IRL headings (even matching which side are the buildings and infra-structures)

6.1) I want them as they exist in real LOW/HIGH ALTITUDE real charts, so some will disappear and others (many) will born

...- They were implemented as extra VORTACs, to mimic their position in the airfield or on the ground, where they exist IRL

...- So all fotorealistic airbases should/ can have their own antennas

...- Some of falcon stock also have their own

...- All other cases were implemented using stand alone objects (Vortacs), be it as terminal for the airbases, or enroute navigation beacons.

...- Rule for the terminal beacons was; if a nav beacon is closer to airfield than 3NM, use if possible an airbase integrated object, case else use of a Vortac object

...- This item means a major overhaul to Stations+ILS.dat file

...- Used the following main rules to determine where to put realistic channles/freqs and where to use fake ones;

Within same Group:
- Used closest city Population to unconfluct within each group

8) Camp Map and others

8.1) Many of changes above will require new Camp Map files

9.1) New addition. Last days of developping this POH version, wanted to include this missing feature

...- Right now only a few PT airbases have this implemented but results are good, and process very easy, so was thinking in giving implementing this new feature.

...- In order to implement the ATC sounds, noticed that POH were using a folder structure somewhat different from BMS standards.

10.1) So, managed to rebuild this structure to match BMS standars

Seems to me that compatibility between both versions will be almost none... even on the DB as you will even have to change Airbases etc on the DB etc.... Didn´t expect such a total overhaul.

Idea is to have a different installation,
Keeping original version also installed.
Want to create a POH-201VFS internal theater.
In case of joint flights with other squads, we will use original version.

Forget to say above; Not a so big bunch of work ahead...

Very quick little things to do, but many little items.

Can tell here that all that work is around 50% done.

Just to give you an idea.

I can move an airbase with objectives and elevations in 1 min, per unit with all surroundings rebuilt.

Am redoing some coast tiles also in Portugal and Spain.
Tejo river coast and west of Lisbon was in need of some little cosmetic review. Done already Rota naval port and Murcia san javier...

Work is going well and I think it will be ready for realease (internally) in 3/4 weeks,

A few airbases are very close to theater borders and will be removed in our version. 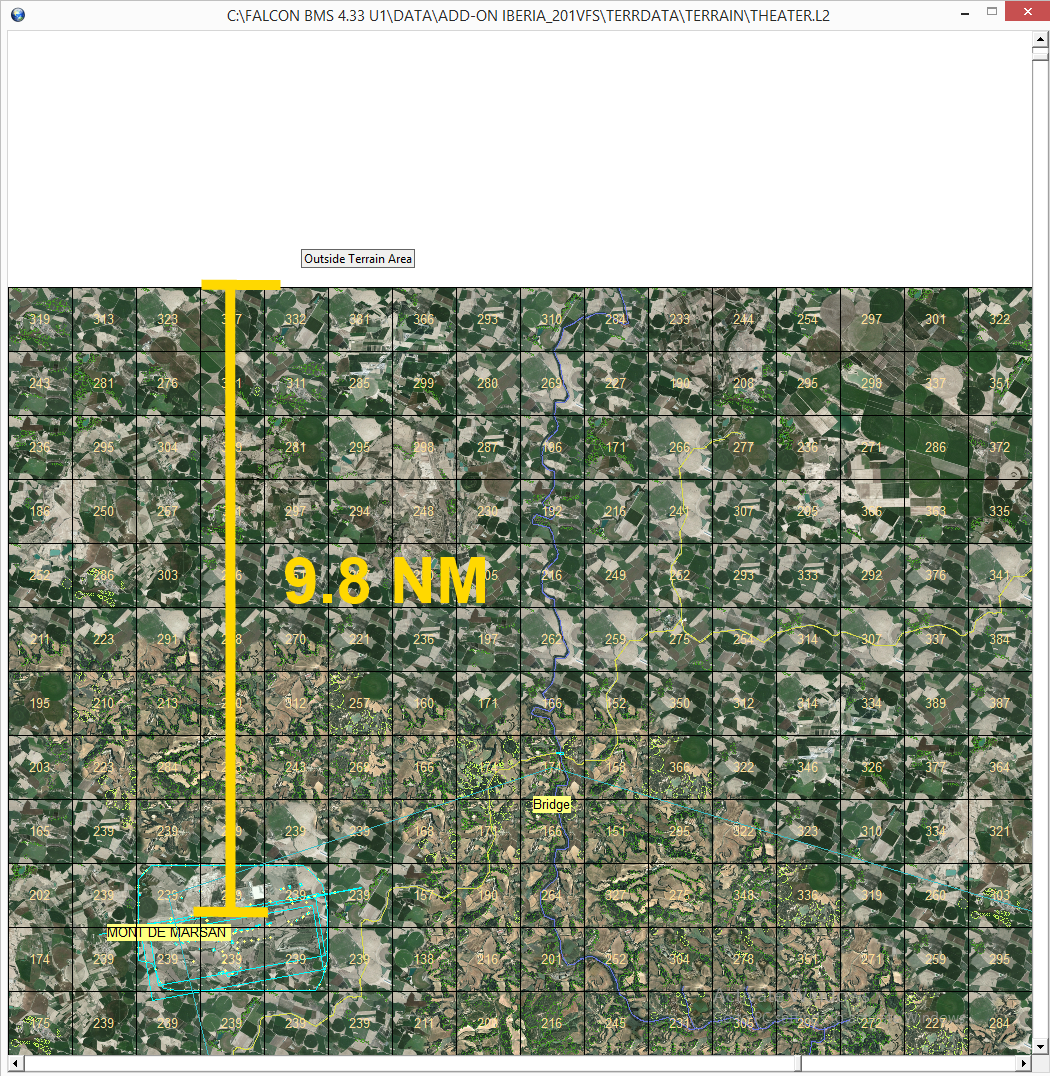 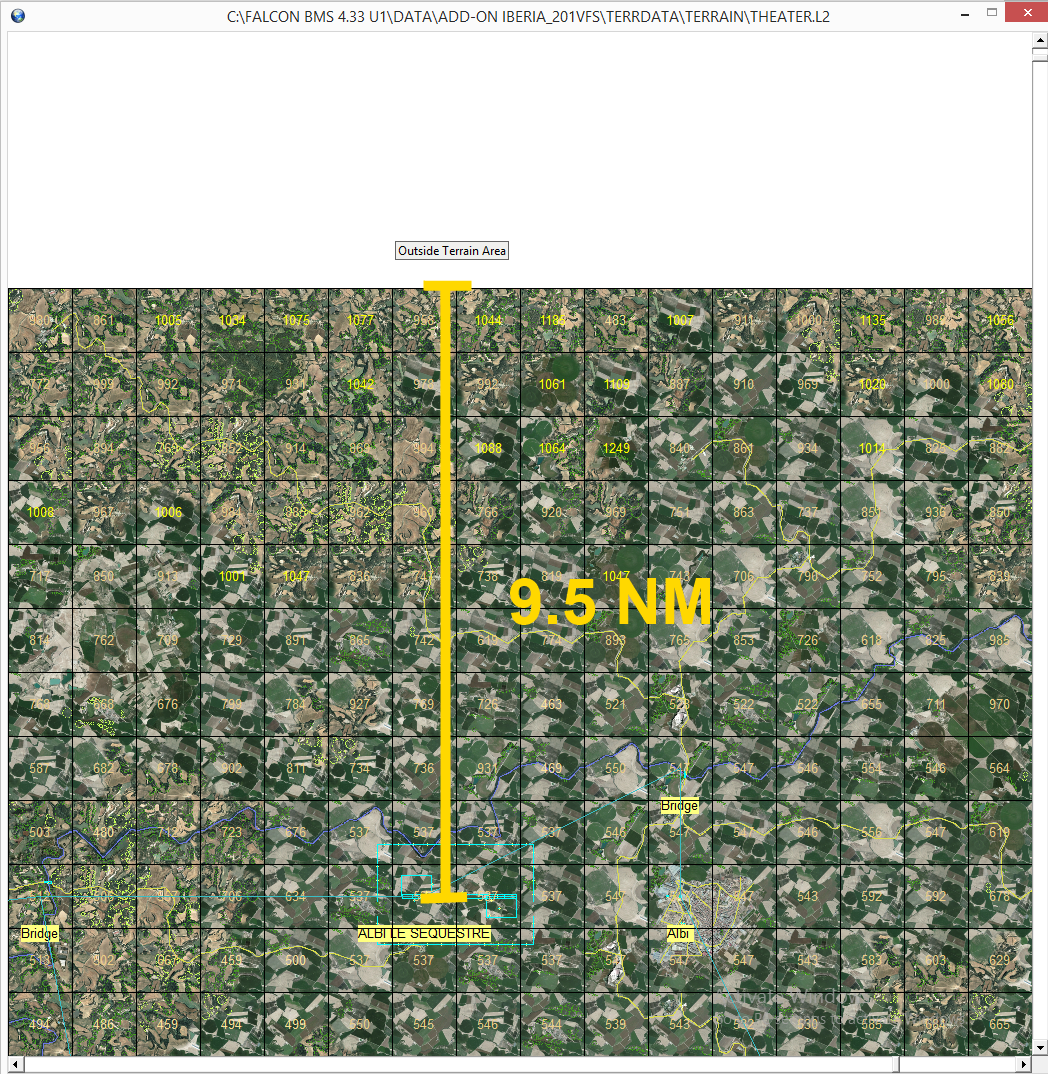 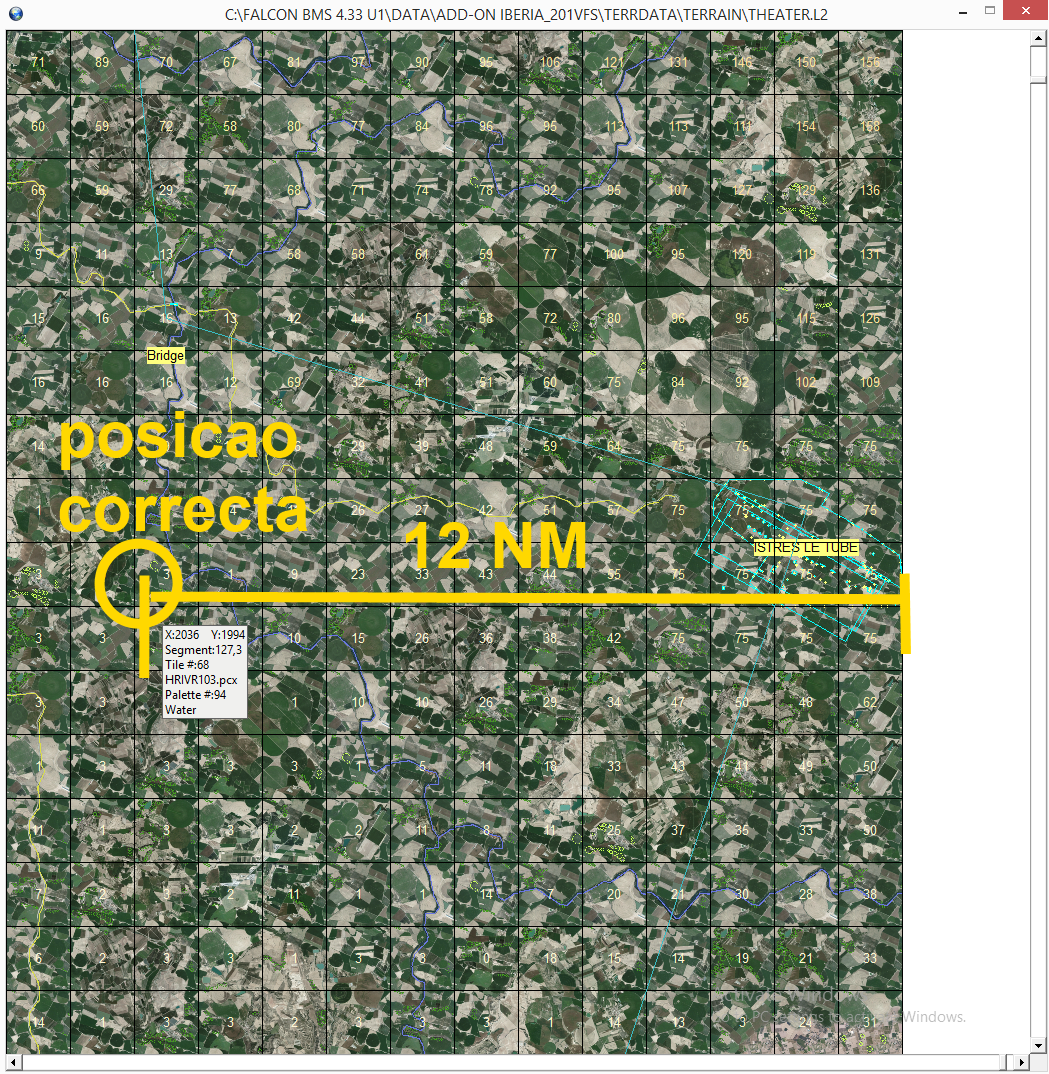 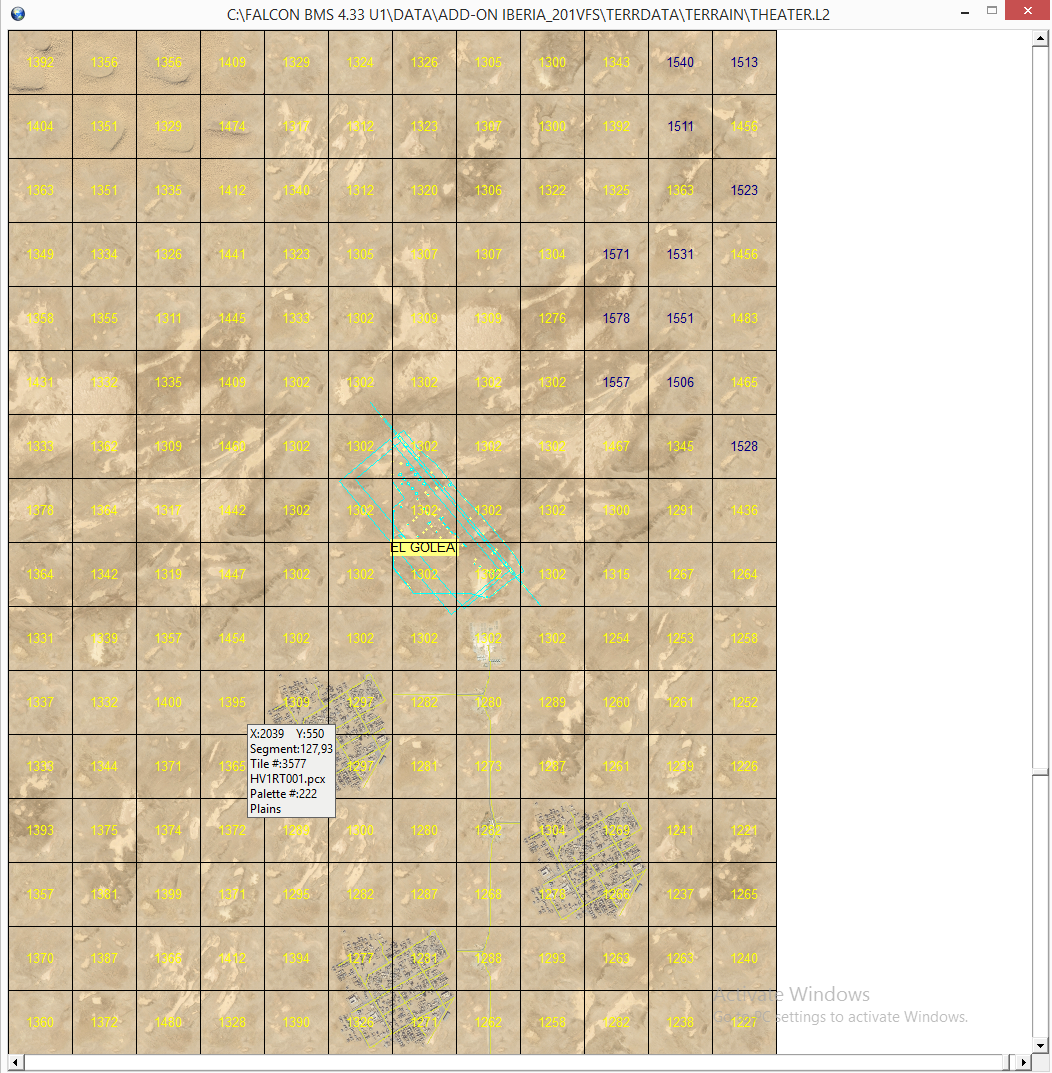 Hey all,
This new BMS version adaptations could mean an opportunity to see implemented some of my proposals implemented...

They mean alot of corrections that would benefit whole POH project.
What you guys say about it?

It seems to me a magnificent opportunity to implement the great work developed with the improvements in quality, design and position of the air bases.

If you can take advantage of the work that is already done, it would be great, but this is my opinion, the personnel involved in the new project will be the one that gives green light to your great proposal.

Many thanks for your work.

if flying were the language of men, soar would be poetry........

Thanks Sniper for your support.
In fact we are already testing one beta release for the 4.33...
Can share with you if you want.
Was about to publish here after beta-testing but now will have to collaborate in the adaptations to 4.34... and only after that will be released the next version.
Or if by a miracle chance it all will be integrated in official POH...

Now theres a full but summarized description of what I wanted to implement in POH_201VFS.

"As you will notice, if read the whole texting

, all changing proposals will only benefit POH official version, so I still keep this dream of seeing them reflected in one future version of POH.

. Whole theater is about to be revised and re-adapted to the new BMS version, so why not take this chance to throw the cards to the table again and check my future."

Reading back it all... and just a very basic idea came to my mind, regarding airfields very close to map´s boundaries:

Just think that not all bases will be needed for jets,,, they can support helos... or just be an emergency landing field... but not for regular operations... if you know what I mean .

Just something for you to think about while deciding to keep or discard completely or partially them...

Yes, understand perfectly your idea, and believe me. Big considerations have been taken into account while deciding on removing those 6 airfields.

Final thoughts were; POH has originally 139 airfields, so 6 out will not mean big degrading in any military actions or campaign, besides that, all these 6 airfiles are located very far from any war scenario (gibraltar entrance and north africa coast), I mean at least 400NM from that possible war front. That's why opted by eliminating them...

As one side note,

Have done some minor revision to item 6) as it was not very clear. Also this item is about something that was greatly developed for the new BMS 4.34 version.

The good news here are, now we can use both Tacan bands (X and Y) for ground stations... so, this means alot more TCN channels (252, before 126) can be implemented, and that means less fake channels are needed to be used... wohaaaa...

Thanks Sniper for your support.
In fact we are already testing one beta release for the 4.33...
Can share with you if you want.
Was about to publish here after beta-testing but now will have to collaborate in the adaptations to 4.34... and only after that will be released the next version.
Or if by a miracle chance it all will be integrated in official POH...

Thank you flyway, I have seen the images (from the Spanish side, San Javier, Zaragoza, Moron) and the change seems spectacular, I will wait for the implementation in 4.34 because the only thing I could help would be in the testing of the theater.

I insist, thank you very much for your work.

if flying were the language of men, soar would be poetry........